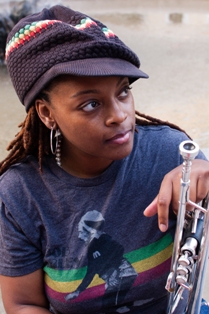 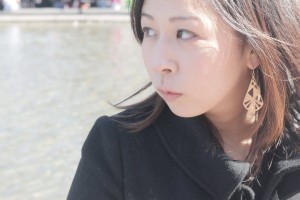 Miki Yamanaka is a pianist, organist, and composer from Japan. She started playing the piano at the age of 5, and then became interested in Jazz when she started playing in the junior high school big band. She moved to NY to study English and music in 2012. She has studied piano and music theory with Jason Lindner, Jeb Patton, David Berkman. She has performed at Smalls Jazz Club, Mezzrow, Fat Cat, Showman’s, Dizzy’s Club Coca Cola, and other venues. She is the current pianist for the Philip Harper Quintet. 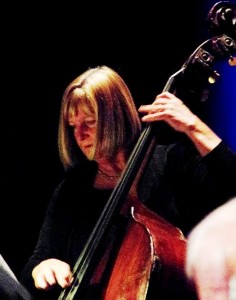 A life-long resident of the Washington DC area, Cyndy Elliott currently works as a freelance bassist, performing many different styles of music in big bands, small combos, orchestras, and chamber ensembles, and is the co-leader of Swingtopia, a jazz octet.  She has performed at many of the major venues in DC, including the Atlas Theatre, Bethesda Blues and Jazz, Blues Alley, Bohemian Caverns, Twins Jazz, and the Terrace Theatre, Millennium Stage, and Concert Hall at the Kennedy Center.

Cyndy has had the honor of working with several renowned musicians from the big band era, including Tex Beneke, Ray Anthony, and Maxine Andrews, and two of the original Mills Brothers, in addition to doing short tours with current versions of the Artie Shaw, Harry James, Jimmy Dorsey, Sammy Kaye, and Les Brown orchestras.  Locally she has enjoyed working off and on for many years with the Tom Cunningham Orchestra and the Hank Levy Legacy Band, among many others.

Cyndy spent a number of years “on the road” touring with the big band show “In the Mood” and the Broadway musical “Meet Me in Saint Louis.”  She did residencies in North Carolina, Pennsylvania, and Massachusetts playing bass and piano with the all-women “Swingtime Canteen” show, in addition to being a frequent sub during its off-Broadway run.  Cruise ship work took her to the Caribbean, Central America, and all over Europe.  She toured Australia and New Zealand with a jazz trombone ensemble and performed in nine cities throughout China with the Park Avenue Chamber Symphony.  She is looking forward to subbing with the national tour of “Sister Act” for a few weeks next year.

Cyndy earned a Master’s degree in Jazz Studies from the University of Maryland in 2009.  As a graduate assistant she directed a number of ensembles and taught beginning jazz theory and improvisation.

Prior to turning her attention to bass playing, Cyndy received a Bachelor of Music in Piano Performance and Pedagogy from Converse College and had a 25 year career as a piano teacher and adjudicator with many award-winning students at the state and local levels and earned permanent certification in piano teaching from MTNA.  In addition, she taught theory, ear training, piano, and voice in pre-college programs at Converse College, American University, and Montgomery College. 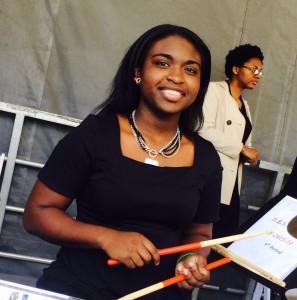 Angeliqua (Angel) Bethea is currently a freshman majoring in Music with a Jazz Studies concentration at George Mason University in Fairfax, V.A. She attended the prestigious Ellington School for the Arts during high school during which she worked closely with the great Davey Yarborough. She also attended the Washington Arts Institute for Jazz each summer for the last 5 years. During her time at Ellington, she had the opportunity to play with Earth Wind and Fire, Patti Labelle, and Sting. She has played at Duke Ellington, the Kennedy Center, and the Strathmore Mansion. While at Ellington, she was able to participate in master classes with Matt Wilson, Terrell Stafford, and Winard Harper’s group. She currently plays with the George Mason Jazz Ensemble, GMU jazz combos, the AVU gospel group, and a local band called D6 that is comprised of former Ellington students. She is also currently playing with the Shannon Gunn and the Bullettes Septet, and recently released an album with them called “It Don’t Mean a Thing…” She currently resides with her family in Washington, DC.

Mastering sound and mood, Halley Shoenberg is an accomplished saxophone and clarinet player whose style is collected from several sources of jazz, theatre and popular music. From swinging originals to noted modern-era favorites, her intelligently inspired brand of music shines with unique clarity.

A multi-instrumentalist who plays clarinet, saxophone and flute, Shoenberg has produced three CD releases, Love Goes ‘Round, Someday, and Private Concert which include several of her original compositions. A native of Silver Spring, Maryland, Halley earned her Bachelor’s degree in Jazz Studies from Indiana University and Master’s in Arts Administration from Florida State University.

As leader of her own “Halley Shoenberg Jazz Quartet” and other ensembles, most recently adding the “Halley’s Hot Gumbo Swingtet,” her concert and festival presentations have won the hearts of jazz enthusiasts who demand master musicianship.

Past performances include the “Halley Shoenberg Octet” in concert at Strathmore Mansion and her bands at DC area festivals such as the Bethesda, MD Fine Arts Festival, Alexandria, VA Jazz Festival and the Silver Spring Swings concert series. As the clarinet soloist in DC’s premiere swing band, Halley is regularly featured on classic swing masterpieces and evening-long Artie Shaw and Benny Goodman tributes. She has played at major venues including the Kennedy Center, National Parks, at the Shenandoah Valley Music Festival and Blues Alley. Her Trio was featured in Worchester, MA at a live performance and broadcast for WICN Radio.

Having intensely studied classical and jazz, she currently teaches private lessons to young clarinet and saxophone students in addition to performing. At Indiana University’s School of Music Halley studied with David Baker, Dominic Spera, James Campbell, Tom Walsh, Lynn Baker, J.B. Dyas and many more outstanding musician-teachers of performance, history, and composition. After graduation, Shoenberg served as intern in the Smithsonian’s jazz history department. During her arts administration graduate program at Florida State University, she performed and toured with the school’s award-winning jazz ensemble and interned at Carnegie Hall in New York City.

Based in Washington DC, her performances on saxophone in Rhapsody in Blue and the West Side Story Suite have been heard on tour in Germany with the Washington Symphony Orchestra. She has also performed traditional “Dixieland” jazz with the Potomac River Jazz Club’s Federal Focus Jazz Band, which participated in Chilliwack Jazz Festival in British Columbia and at the French Quarter Jazz Festival in New Orleans. Shoenberg has performed in New York, at the Boswell Sisters Centennial in New Orleans and at the Women in Jazz Festival at the Kennedy Center.

Saxophonist/arranger Leigh Pilzer has performed at many of Washington, DC’s top jazz venues, including Blues Alley, Twins Jazz, and Westminster Presbyterian. She co-leads the Jen Krupa–Leigh Pilzer Quintet (JLQ), which has been featured at the Atlas Performing Arts Center, Blues Alley, Jazz at the Garden, The Mansion at Strathmore, and the Takoma Park JazzFest, among others.

Leigh is a member of the Smithsonian Jazz Masterworks Orchestra, The DIVA Jazz Orchestra, the Bohemian Caverns Jazz Orchestra, Mike Kamuf’s Little Big Band, and Shannon Gunn and the Bullettes. With SJMO, DIVA, and the National Symphony Orchestra she has toured across the United States and in Austria, Canada, Croatia, Egypt, England, France, Germany, Holland, and Russia. She also freelances with a variety of ensembles in the mid-Atlantic region.

Leigh’s arrangements have been performed by the DC-area premier military jazz ensembles and by college and professional jazz ensembles and brass quintets throughout the country. DIVA recently recorded several of Leigh’s big band arrangements: two can be heard on DIVA’s most recent CD, A Swingin’ Life (2014) and two more will be included on the band’s upcoming release Special Kay, (scheduled for 2015). Another was featured on the soundtrack for Macy’s 4th of July Fireworks Spectacular (2014). Other arranging credits include horn section writing for recordings by Chuck Brown and Eva Cassidy and orchestrations for the critically-acclaimed show Maurice Hines is Tappin’ Thru Life.

Repertory performances and lecture recitals include “Collaboration in Jazz, Featuring the Music of Gerry Mulligan” and “The Music of The International Sweethearts of Rhythm, Mary Lou Williams, and Melba Liston” with the Smithsonian Jazz Masterworks Orchestra Quintet; “Sax in the City,” featuring the music of Benny Carter, Gerry Mulligan, and Lester Young with the SJMO saxophone and rhythm sections; and “Women in Jazz: The Early Years” and “The Music of Melba Liston” at the Washington Women in Jazz Festival.

Leigh holds a Bachelor of Music in Jazz Composition and Arranging from the Berklee College of Music and Master’s degrees in Jazz Studies and Saxophone Performance from The University of Maryland, College Park. After completing her academic work at Maryland she studied studied traditional and jazz theory at The Catholic University of America with the late Dr. Steven Strunk. Leigh has served on the faculties of the University of Maryland and Towson University, where she has taught Jazz Theory, Jazz Arranging, and Jazz History. 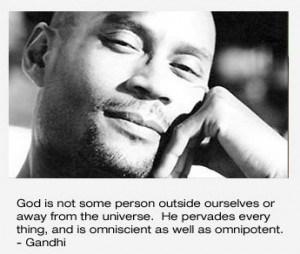 Herman Burney, “has the complete package … he is extremely talented, he possesses a reverence for the music, technical ability, and (to top it off) he is a genuinely fine person. The world needs his music and I am happy to count him among my friends” writes John Clayton.

Born in Washington, DC, Herman was raised in the arts-nurturing state of North Carolina, specifically Winston-Salem. Herman grew up in Church listening to Mahalia Jackson, Aretha Franklin, and James Cleveland; during these years, he played clarinet, drums, and tuba. “Music has always been an integral part of my life. Both my parents sing in their church choir, and my father sings bass in an all-male a Capella group.” Herman’s next major influences were Soul, R&B, and hard-core funk during high school; he played the electric bass during that time. “As a teenager, my friends and I started our own bands; we played in the garage, basement, or any place that we could. I even snuck out of the house at night to hear groups like Ramsey Lewis, Cameo, Parliament/Funkadelic, the Brother’s Johnson, and Graham Central Station!”

Herman was initiated into “Jazz” by Bill Bright in Winston-Salem, whose musical legacy lives through the many people he helped during his physical life here on earth. “Bill Bright personally took me under his wing, made me practice, allowed me (with my incredibly sad bass playing) to join the Bill Bright Quintet, gave me my first gigs on acoustic bass, taught me about chord changes, and loaned me Charles Mingus and Thelonius Monk albums to check out so we could play it together!! Make no mistake … Bill Bright single-handedly started me on my Jazz journey … I’m still figuring out what he showed me!”

Then in 1987, after a chance meeting with George Duvivier, Herman finally settled on his beloved double bass. “Until then, I had never heard music, especially on a double bass, that required so much honesty and dedication. George showed me that there is no room for pretense in American Classical music (commonly called “Jazz”); if you don’t give yourself completely, your music will show it and your audience will know it.”

A true student and fan of jazz music, Herman often gives his time and effort to the support of future jazz musicians. “Milt Hinton, John Clayton, Bob Cranshaw, Ray Brown, Victor Gaskin, John Heard, Keter Betts, Freddy Cole, George Duvivier, Percy Heath, and Rufus Reid have shared so much with me that it is incumbent upon me to pass it along to others … I just can’t keep this information to myself.” To this end, and when his schedule permits, Herman enjoys working at music camps, presenting workshops, teaching private students, and educating audiences. “Jazz audiences are generally well informed people who MUST be considered at all times; playing in Freddy Cole’s band for over 4yrs really taught me this lesson. Cole taught me to assemble the musical presentation based on audience demographics, NOT necessarily what I want to play. Therefore, as a musician, I am responsible for learning as much music as possible in order to choose songs carefully that positively impact an audience.”